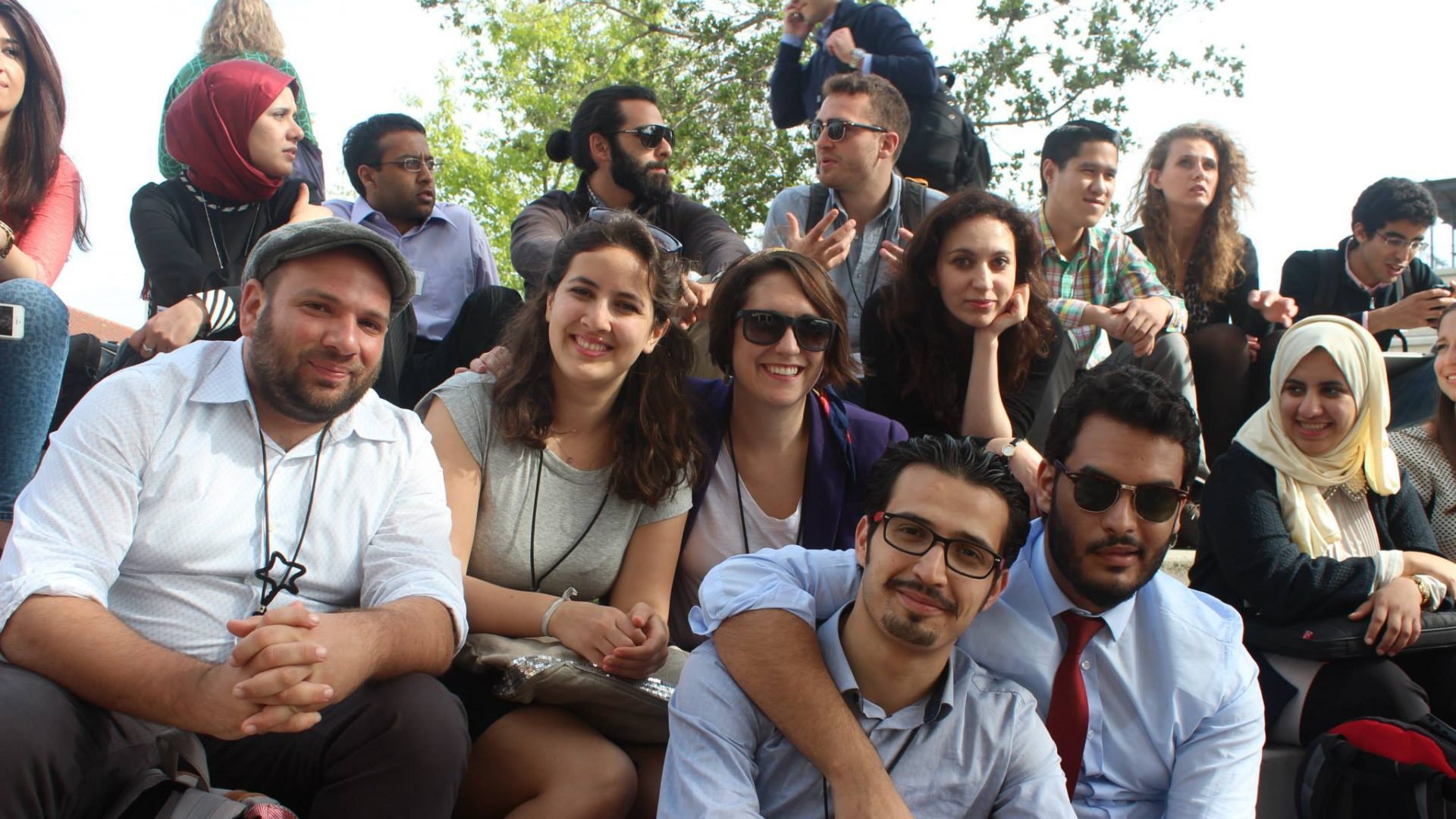 Last week, Moroccan TV channel 2M made international headlines after airing a segment teaching women how to cover up the bruises left by domestic violence. In response, Dar Si Hmad staff asked some of our students to reflect on the issue of violence against women, how they have experienced sexual harassment, and what they think the media should be doing. A shorter version of this op-ed appeared on the British i News.

Sabhiyat, a daily programme on Moroccan national channel 2M, recently featured a segment teaching women how to disguise domestic abuse injuries. “Unfortunately, this is how things are,” the host mentions before outlining tips for how foundation can hide bruises. The segment ends dismissively, telling viewers “We hope these beauty tips will help you carry on with your daily life” – as though domestic violence can and should be easily ignored by its victims.

As has been well documented, violence against women is not a new issue in Morocco. 55% of its married women experience domestic violence. A few years ago, Amina Filali killed herself after being forced to marry her rapist. The United Nations and Human Rights Watch remain concerned by the limited legal protections available to victims. See more about this and preventive actions in a piece that appeared last year via The Conversation.

Given the statistics, this news segment sadly was not news. What was shocking, however, was its open acknowledgement of the problem even as it flagrantly dismissed it. The presenter apparently “considers this taunting experienced by women as normal” (see The Concerned Moroccan Citizens campaign). Rather than supporting abuse victims, this kind of reporting legitimises the violence and all but removes blame from the abusers.

Dar Si Hmad for Development, Education and Culture is a local non-governmental organisation working in Southwest Morocco. Our work includes women’s empowerment and capacity building, girls’ science education, and intercultural exchange through study abroad. In the wake of the 2M segment, we asked some of our young partners to respond. Here’s what they have to say:

I have enormous concerns about this topic. We are in a country that considers girls the main problem causing sexual harassment. I will never forget my first time in a grand taxi (public transit cars) between Agadir and my hometown. I had just spent two weeks away from home for the first time in my life. I viewed the taxi driver as a father or brother, like anybody else doing his job and helping people get home safely. I knew something was wrong when I started getting weird vibes from his glances in the rear-view mirror. Immediately, I started to question myself. How could a man his age act this way with a teenage girl? Maybe I am his daughter or his sister’s age? I was afraid, uncomfortable, and shocked. I was also blaming myself for getting in an empty taxi and wondering if my hair or my outfit had encouraged this. He was smiling, and asking me questions. I was pretending to listen to music, but he wouldn’t look away or stop talking to me. I put on my sunglasses to hide tears, and I wanted to scream. I was squeezing myself smaller in hopes he wouldn’t try to touch me. When we arrived in Agadir, other people got in, and I got out. I have never felt such feelings in my life. I was in his cage, and he enjoyed looking at me stressed. Through this experience I learned that while we still have stereotypes about girls in our societies, I will never trust bosses, taxi drivers, workers, or teachers, until we stop blaming the victim.

Being beaten by your husband or anyone is inappropriate. What’s worse is that the media makes it into a makeup tutorial, which makes it seem like this behavior permissible. We don’t just paint a wall covered in cracks, because no matter how many layers of paint you put on, the cracks will appear again sooner or later. Wives are not punching bags for husbands to take out their anger on. We have all experienced some sort of sexual harassment, but the bigger issue is that often nobody intervenes, because this has become so normal.

For instance, once I was riding a crowded bus, and I noticed that something strange was happening between a couple standing near me. The guy seemed like he was trying to do something, but the girl didn’t speak up. She looked so embarrassed. I made a fuss about it, and even when it seemed like he was going to hit me for saying something, NO ONE SAID ANYTHING. They just watched. There are places to go if these things happen to you, but unfortunately married women don’t go because they are afraid of shouha (shame). Of course norms, traditions, family views, illiteracy, play a big role in the spread of this phenomena.

As a young man I think domestic abuse is a gendered crime which is deeply rooted in the societal inequality between women and men. It takes place “because she is a woman” and happens disproportionately to women. I also think that women are more likely than men to experience multiple incidents of abuse. Domestic abuse exists as part of violence against women and girls, which also includes different forms of family violence such as forced marriage. This kind of abuse is very popular in Morocco, which is a shame for our society. I believe that the last show in 2M normalizes violence against women, and helps them cover it with makeup. Instead, it is very important to raise victims’ awareness and orientate them to get the help they need from authorities.However, I also see this show as a step forward, since it launches discussions worldwide about this issue and will certainly push the authorities to get the attention needed for the victims.

The media creates a false image for women: either she is well educated and elegant or manageable and traditional. The media is not fair with these women. Instead of spreading their success and informing the audience of changing dynamics, it misshapes their real image into a false and bad one. It tells women they have to obey their husbands instead of defending their basic rights.

We live in a patriarchal society that still believes that it is the wife’s responsibility to keep her family in harmony. We teach women they need to keep being patient or they will destroy her family. It is very weird to know that being beaten is a normal act. The weirdest thing is to cover up abuse instead of voicing your opinion and talking about your right of being respected.

‘Woman’ is a very priceless word for me. She’s my mother, my first love, the person I’ll do anything to keep alive. I won’t accept anyone saying things against or hurting her. Woman is my sister, my auntie, my friend, my everyone. Nobody has the right to touch a woman because of her gender or because the world gives her fewer chances. A woman is a human before she is a woman. She has rights we are obliged to peacefully respect. She has dreams of success and gifted hands, just like men do. As such, I totally respect and support her.

Seeing this show reminded of the conclusion I came to in my bachelor’s thesis. I discovered that the media is a way of reinforcing dangerous stereotypes about women. I analyzed two Moroccan advertisements. In both, women are obedient, naive and almost always silent. These assumptions are transmitted between generations. If we don’t change something, the next generation will perceive women the same way their parents’ generation did.

I have never personally experienced violence, because I am lucky to come from a peaceful, honest home. We’re a patriarchal society, and violence is not only linked to husbands; it also comes from big brothers and uncles. Unfortunately, I have encountered sexual harassment, mostly verbal, and it’s upsetting to see that my favorite TV programs are giving make up tutorials on how to cover beatings. It’s really a shame to see how a serious issue has become so normal. Instead of covering it up, they should be talking about how to address the roots of this issue. Husbands need to control their anger and respect their wives.

Like many others, I encounter sexual harassment in the streets and it is mostly verbal. It is very offensive and insulting even when only verbal – and I wish the Moroccan government would criminalize that act. This should be a free country where men as well as women are free to wear whatever they want without being harassed. To help protect that freedom sexual harassment of any kind should be met with extreme sentences

The 2M TV segment is actually no surprise to me – the channel isn’t very good. Instead of wasting five minutes making a senseless beauty tutorial, they should have taken this dangerous matter into real consideration. They could have brought a legitimate coach, psychologist, or lawyer to teach us how to take action and not be afraid.

And however the bruises may look, women will always be strong and beautiful. No make-up necessary.

Tragically, domestic violence continues to be an issue – in Morocco and around the world. The media has a unique position to play…for good or bad. Reports like the one that aired on 2M are part of the problem. But speaking out can help break the cycle and be part of the solution. We invite you to join us in condemning violence against women.